Gentry Academy is an accredited school that boasts strong programs in several sports, started by a family that wanted to offer something unique.

While the Gentry’s hockey program garners much of the attention for the way it is intertwined into the education, there is so much more at the school that has very little to do with physical education.

When you hear about Gentry Academy, the image is of a hockey school. After all, the two Lucious brothers — the 13 and 14-year-old sons of the founders of the school — have already committed to play for the Gophers.

“Both of them have a really bright future,” Gentry athletic director Jack Jensen said. “Obviously, the Minnesota Gophers think the same way. They’ve always been two of the top players at that birth year, all the way up the ranks, ever since they were 9 years old.”

But upon further review, you begin to realize there is something more.

“We have parents who say they came for the hockey, and they stay because of the education,” Gentry Academy education director Jennifer Kurth said.

This is a different school where physical education are part of the intent, but it’s just part of developing an individual.

“As a leader, I want these kids to walk away from here knowing how to lead their lives,” Gentry’s leadership director Megan Stone said. “Knowing how to walk through a failure, how to repeat a success and how to recognize how they learn best.

That’s the mission of the administration — to create an environment where leadership qualities emerge.

“I love having one-on-one with teachers. Being able to ask any question is really nice,” Gentry student Jack Harvey said. “So that I don’t feel like I shouldn’t be asking questions.”

There is a desire to develop athletes as well — they’ve partnered with Vadnais Heights to use ice and share a parking lot. They’ve even built their own, state-of-the-art workout facility for all students, with the hope they will grow in ways they could not envision.

“Even our coach said, ‘I’m going to help you guys learn how to change a tire,’” Gentry student Grace Heiting said. “Never something I thought I would learn how to do in high school.”

“Everyone assumes that all of our kids are going to college — that they’re all four-year college bound,” Kurth said. “So we run with that and prepare them for that.”

Because at this end of this part of the journey, what they really want is what most of us want — an opportunity to find a calling.

“When you see a kid all of a sudden going down a path and they switch, and that light bulb goes off where they know that they can change their life and they have the power to do that — there’s nothing like it in the world,” Stone said.

St. Paul’s Lecker is US Lacrosse program director of the year! 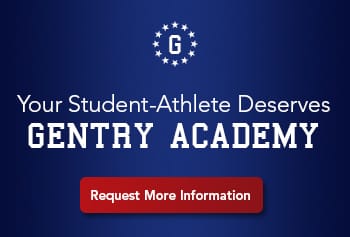 "Our progressive curriculum offers leadership and life skills training for all ages and creates unparalleled growth for our students. We are truly building tomorrow's leaders!"

"Our unique mentoring approach to learning encourages older students to be actively involved in the development of their younger peers."

Student-athletes participating in the Minnesota state high school league for an elected sport are restricted from development with their coach in that elected sport during the off-season.